Had an Astrazeneca shot, first of two. Lost an entire day being KO'd or TKO'd due to flu-like symptoms - fever, headache, upset stomach, achiness, dizziness, fatigue, headache. At around three p.m., just crawled out of bed for more than a few minutes for the first time today.

Still- better that the alternative. See you on the other side of this sonuvabitch.

After a day of spinning my tires, with little  focus amounting to almost nothing, resignedly running the hub; I stepped out this eve to catch a glimpse of the pink supermoon (obfuscated by clouds last night). My familiar and I immediately spotted a visitor clambering treeward from the deck. Wonder what ithey thought of my red-and-black plumage (lumberjack coat) and my short-haired, grey-and-white mouser? Certainly enough to not budge after they reached a goodly height. The stand-off could have been interminable. So, in the kindest assertive tone I could muster, I offered, through action and words, that we would go back inside, so long as the visitor cleared out before we came out again. 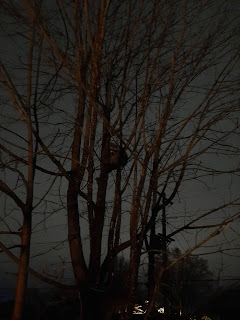 Musings about the original Captain Marvel 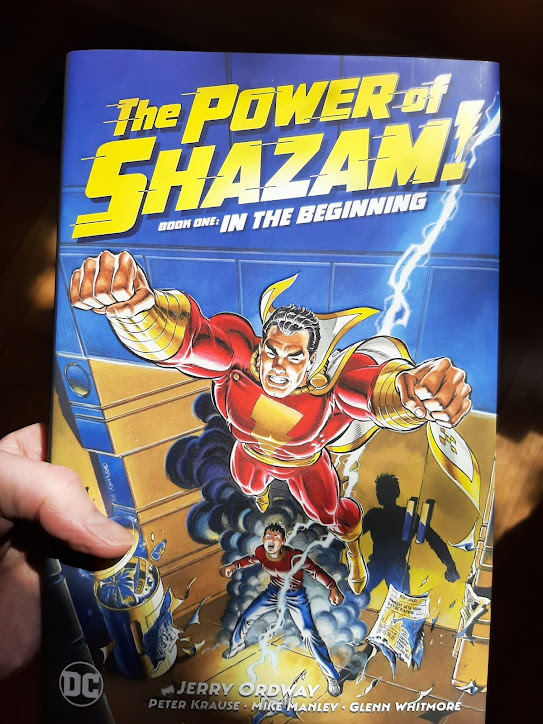 Always adored the original Captain Marvel, from Fawcett Comics, depending on the skillful execution of the treatment. There's just something fundamentally appealing to me about a comic character steeped in magic. The Big Red Cheese is now more widely known as Shazam (long story, worth watching a Youtube show such as Casually Comics). This character's heartily 1940's pulp-era vibe also helps cement my appreciation of the character. With a magic word, an orphan boy transforms into an adult hero with obvious pulp-cinema, matinee-idol looks and inspiration.

Earlier versions separated the boy and man characters; with CM as a separate heroic identity from ... somewhere? Likely hanging around  the Rock of Eternity, waiting on-call? The trend the past few decades has been to have orphan Billy Batson in charge when he is Captain Marvel as well.

Some more strident fans of other flagship DC Comics superheroes seem to often dislike CM. I have wondered whether if it is because of the obvious parallels to Superman (also a long story, which gets down into the weeds if you like that sort of thing) or simply that Captain Marvel's superpowers are explained as magical,  and not with the at-best pseudo scientific theory (which is almost joyously risible) that allows for Superman to fly, etc. In Captain Marvel's adventures, also, magic allows for, well, anything to happen, which can get ... delightfully bonkers, actually.  Other readers perhaps need to have better rules, however arbitrary, about knowing where the walls are?

I also find fascination in artists who genuflect over such a character throughout their careers, because obviously that archetypal hero speaks to something in them. Case in point? Brilliant comics-famous artist Jerry Ordway, whose pencils—and colouring and painting!—are exemplified above and below.

In The Power of Shazam! graphic novel Ordway went all-in with a  glorious retro, pulpy, Raiders of the Lost Arc-colour palette, which he painstakingly illustrated over more than a year.

For the following monthly series, Ordway modernized and updated the hero's origins for the late 1980's, keeping it in line with Legends, the 1987 six-issue limited series that rebooted the DC Universe. He stuck to painting the covers at a reduced rate, while Krause pencilled the interiors. 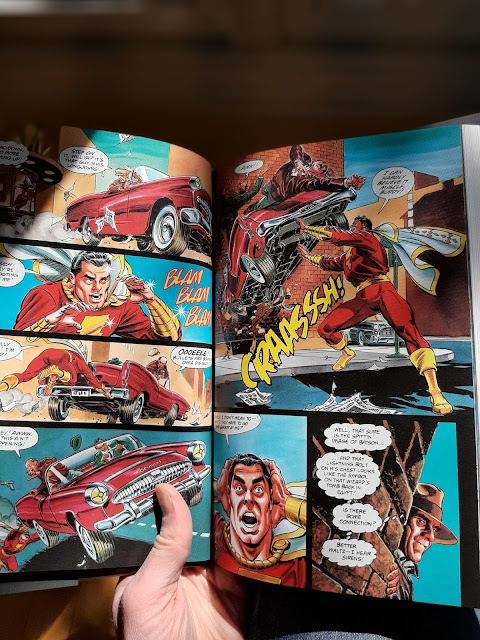 From The Power of Shazam! graphic novel
Posted by James K. Moran at 1:17 PM No comments:

And today, my son is thirteen years old. Now that he is a teenager, he can start a Facebook account, although I have always been somewhat elusuve and circumspect about mentioning him on social media until relatively recently. This momentous age throws a lot of my life into perspective. I have been told  repeatedly that I have a good memory and can vividly recall, for better or for worse, much of being twelve, myself.

So now  I look at myself and wonder what my struggling twelve-year-old self would think of who I have become. I grew up in the 1980's in a small city that aped a small town in its attitudes and atmosphere. I first used a typewriter and then a slew of computers before the rise of the Internet and personal computers and gadgets. He is growing up  during Covid in a big city and is a digital native who can cide video games, to cite a few notable contrasts.

Am I who I want to be? Am I there enough for my son? Am I reigning in my temper, having worked at it for a while now? How do I keep my foibles from imprinting on him? What do I feel the need to change about myself?  How do I guide without (always) nagging, teach by example without preaching?

No easy answers to any such questions, and more, of course. I know that much. The answer lies in the doing and learning for the most part, and rolling with any inevitable mistakes as best I can. He is a great, kind-hearted, creative, empathetic kid. Must have done something right so far.

There was an urban myth circulating for years about the original 1962 King King vs. Godzilla that posited it had two distinct endings. In the Japanese theatrical release, Big Green was supposed to win, while in the U.S. release, the King was apparently the victor. Myth's been debunked since.

Alas, I believed the urban myth until all too recently.

Why must Covid bring disillusionment about even this, my fragile truth about a rubber-suit monster movie?

Saw the Japanese version at a Sunday matinee in my hometown at the Port Theatre. For the record, Kong won. Bystanders claimed that his tussle with Godzilla was like fighting someone with a flame thrower.
A syfy.com article about the urban myth is here.
Posted by James K. Moran at 1:30 PM No comments:

Okay—so I am harried, in a good way. Chuffed, really.

In addition to having a paying editing gig, a historical fiction novel, as of last week, my publisher asked me to look at cover options for an upcoming anthology.  I opined.  In the end, he chose the same cover I chose.

And hot on the heels of that exchange, he dared me to write 1,000-word horror fiction for a particular market, particular as in I-dare-you-to-write-this-and-I-may-publish-it-if-I-like-it.  He would need it by mid-April.

Looking at a Novelette, got a Paying Editing Gig

In between  getting my literary rocks off drafting my "Full Moon Addiction/Rehab" work-in-progress, I received important business news.

My publisher checked in yesterday.

Had I started looking at his novelette, which he sent the other week?

But, being a self-respecting writer, I didn't tell him that, of course.

First, I perused the first two chapters over my lunch break. He sent nine, which I had already stored in a file. Then I could honestly reply soon after that, yes, I was looking at it. What format did he prefer? He had emailed a mix of Word and Rich Text Format files. And how deep or into-the-weeds should I get with my comments and edits?

This news seemed to ... please him?

Yes—it must have. He immediately offered me a bona fide, paying, editing gig on a historical fiction novel.

I had hoped, from how well things went editing the anthology of queer fairy tales starring hirsute and hefty gay men, that he might send me some work down the line. But this soon? Fantastic.

This marks my first official editing gig on a novel, so there is  that. 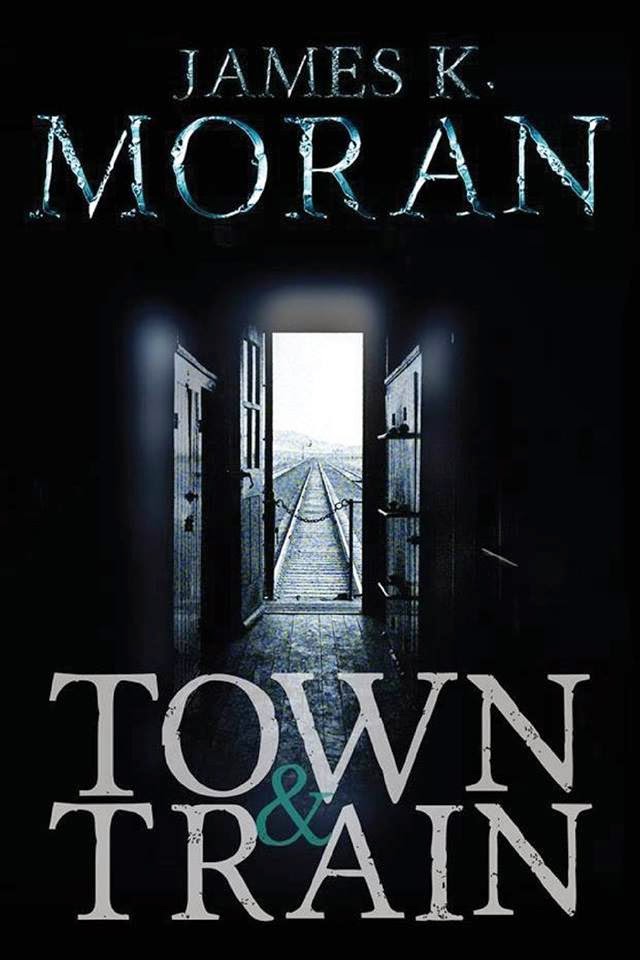 In a small Ontario town, seventeen-year-old John Daniel wakes by the railroad tracks with no recollection of how he got there. Something called him from his bed. Officer David Forester, a recent transfer from Toronto, struggles to fit into the local police force, despite resistance from established circles. Both soon suspect a more pervasive and menacing collusion occurring in town when an antique steam train arrives late in the night. At the phantasmal engine, a conductor promises the desperate locals escape from their town dying with so many closed stores and shattered dreams—but there is no denying what the stranger really brings is the stuff of nightmares.

"I thought James K. Moran's book was a perfect balance of elements, from descriptions to character personalities and development, to more subtle aspects such as plot and narration. The undertone builds slowly and subtly, taking you to a very satisfying end. The style reminds me of earlier Stephen King. All-in-all, a truly satisfying read."

—Benoit Chartier, author of The Calmunist Malefesto: And Other Improbable Yarns andRed Nexus, a novel

“Taking place in a small, financially strapped Canadian town in the early 90s, Moran captures the wanderlust of both his teen and adult characters while simultaneously adding elements of Peter Straub and Stephen King into the mix." —biggayhorrorfan blog

“A ticket to ride an antique train, mysterious dream visions and vanishing towns—these are the things that will set your heart racing in James K Moran's very welcome addition to small-town horror stories. Wondrously weird and eerily compelling, it is a knockout.”

—Jeffrey Round, author of the Lambda Award-winning Lake on the Mountain and The Honey Locust

“Moran ... depicts the mentality of those who live there, mostly the younger generations. Right down to calling the place a hole. This is precisely how folks feel about Cornwall growing up, and as such, that mentality was a great way to wrap a horror story into.”
“A very good horror novel with a large cast of interesting characters.”

“Moran, also, seems to be someone worth reading more of, whatever the project may be.”

All views and opinions expressed in (Re)Viewed are the author's, however influenced they are by Ray Bradbury, Jack Kerouac and Glen Hirshberg.

Away from the keyboard 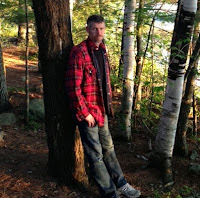